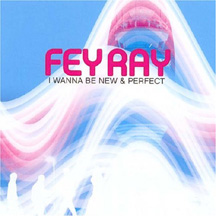 Matt Duss (of the band Fey Ray) is a man who knows how to write great pop tunes. His dreamy melodies and fantastic voice combine to create beautifully lush orchestrated pop. This e-mail interview took place not long after the release of the album I Wanna Be New and Perfect (on Blue Disguise)...an intricate and highly rewarding collection of superb pop tunes.

This is one of five e-mail interviews that were conducted simultaneously in August 2004. Compare Mr. Duss's answers with responses provided by four other fantastic artists to the exact same questions:

By making sure I'm aware of all my options, carefully weighing the costs and benefits of each one, and eventually just flipping a coin.

CDs, books, and pants are the only things I buy used. I realize it doesn't make sense that I wouldn't buy a used shirt because a guy had his armpits in there, but not be bothered by used pants where his boys used to hang, but there it is.

Curiosity in others draws me, because I'm curious. I like people with an interest /openness to random, arcane bits of information just for the pure newness of it. The opposite, incuriosity, makes me want to stay away.

Yes, because they've figured me out for the fool that I am.

I cooked in various restaurants for six years so any time I'm cooking without ten other tickets waiting to be fired is soothing and relaxing for me.

After lengthy experimentation, I think that orange is the funniest thing I've ever heard.

It depends how you define intelligence. I think human beings are more technically proficient at a larger number of small tasks than ever before, such as driving cars, working ATMs, etc., but as a species I don't think we've necessarily gotten any better at critical thinking or being willing to give up our dearly held superstitions and preconceptions, so I'd have to say we're holding steady, more or less.

That the foreign policy of the United States must be profoundly reoriented. We must lead by example and through diplomacy, and only occasionally, not primarily, through the use of force.

359 pages in my dictionary.

I'm sorry, I have a nine month old daughter and it's impossible for me to imagine not wanting a baby.

Yes. It provides a way and a reason to translate our subjective, abstract sensations into an objective, defined system.

Through the use of a little something I like to call "sight."

Injured? No way. Killed? If I was certain they were dead? Absolutely, positively certain? Depends.

They don't make stuffed plants for kids to sleep with.

With great, sweeping gestures and sometimes with little shoebox dioramas.

I realized pretty early on that none of these adults knew what they were doing any more than we kids did, that everyone was faking it. I think I fake it pretty well, though.

"Information is not knowledge. Knowledge is not wisdom. Wisdom is not truth. Truth is not beauty. Beauty is not love. Love is not music. Music is the best." - Frank Zappa