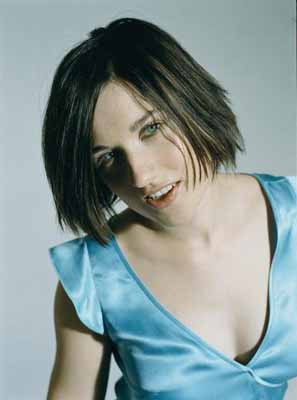 Butterfly Boucher is one of the most refreshing new talents of the twenty-first century. This e-mail interview took place not long after the release of her Flutterby album (on A&M)...a collection of utterly fantastic compositions featuring soaring melodies, imaginative arrangements, and top notch vocals. Ms. Boucher writes, plays, and sings in a manner that is uniquely effective and very rare indeed.

This is one of five e-mail interviews that were conducted simultaneously in August 2004. Compare Ms. Boucher's answers with responses provided by four other fantastic artists to the exact same questions:

I take note of my first gut feeling, stew on it, talk about it with a good friend or two, think about it some more. And then go with my gut feeling.

I wish I could install a spell check in my brain!

Both. It's nice to buy something brand new and fresh. But then sometimes used things have so much more character.

Who the hell really knows?!

Some do, some don't.

It depends on how grumpy and hungry I am. But I usually enjoy cooking, especially for a bunch of people.

I would say, mostly unaltered. It's a precious thing.

When loved ones, dreams or hearts are involved. Especially if all of the above!

As human beings in general ... I don't think we've grown that much. Technology wise, we are getting too intelligent for our own good.

That one day I will die.

Having never been in that situation, I cannot know what I would do.

Yes, communication is important, It's nice to know that you can be understood. But then everybody has a different way of naturally communicating, so that's where it gets tricky.

Same way you know what's hot and what's cold. You learn by getting burnt!

I would have to stop, there is not an inch of me that could keep going.

I'd like to be remembered, I would hope that I had something to offer this world, something good enough to have people want to remember me by.

With great difficulty and lots of hand gestures!

No not really, but I don't think anybody's noticed!