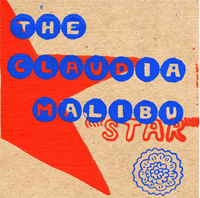 Claudia Malibu is a wonderfully refreshing and rather obscure little pop band with fantastic tunes. This e-mail interview took place not long after the release of their Star album. Considering how many artists are trying way too hard to be really weird or to be really original...the band's simple, direct, and sincere music is a refreshing blast of cool air. The four members of the band opted to answer each question in this interview individually.

This is one of five e-mail interviews that were conducted simultaneously in August 2004. Compare the answers from the folks in Claudia Malibu with responses provided by four other fantastic artists to the exact same questions:

LL: I blink, stammer, and cry until the information is released.

CM (this is a group answer): Actually, we sit around Luke's house eating Primo (pizza) and making fun of everyone else and their bands.

LL: The size of my nose and teeth.

CM (group answer): Worm's lack of groupies and the lousy amount of drinks allotted to Luke and Les!

CC: Used because older stuff is often better stuff, especially goes for cars. Only an idiot would buy a brand new car. (Except Worm--he bought a new car but I wouldn't call him an idiot because he might read this answer.)

LL: We bought a cheap new PA that sucks! But our old instruments are great. We would like a new van please!

WW: Most things used because older things are generally better. Most new things are garbage.

AA: Used. You get the same thing for so much less money.

LL: People that listen are cool. What draws me to a person is when a person who's never heard you before (Kim from Cinci) drives 6 hours to see you because he thinks you're from Maryland and then sits in on nearly three-quarters of your set playing sax in Dayton, Ohio. What makes me wanna stay away is being told by a soundman in Dayton, Ohio about a sexy night of dry-humping on a dance floor and receiving a scab on his member.

WW: People that constantly talk put you to sleep.

WW: Unfortunately making money but I'd like to think love.

AA: What are friends?

CC: They drive drunk and get tattoos and use credit cards, but at least they don't get sex change operations that they then change their minds about.

LL: Our friends are not common!

WW: Nobody f*cks up too bad.

AA: Neither, I make my living at it.

WW: I wish I did it more often but I'm lazy.

CM: We like Primo Pizzeria because we have a calzone named after the band there. It's called the Malibu Les Zone. Sometimes we barbecue.

AA: McGruff the Crime Dog says don't do drugs and take a bite out of crime!

CC: Sleep deprivation, starvation, brainwashing, and torture--I'd prefer myself unaltered by these things. But dreams are great. Drugs can be fun, of course.

LL: Slightly altered but not to the point where you think Tin Foil Hat is the greatest band ever! (CM agrees)

CC: It's all relative. Elvis is important to me because we have the same birthday, but he never meant shit to Public Enemy.

CM: We have a heightened sense of self-importance.

AA: I think it fluctuates like the economy. I think America's been having a great recession of intelligence since the mid to late 90's.

CC: Money grubbing selfish assholes are not intelligent--but there are a lot of them.

WW: The computers do too much thinking for us.

CM: We are money grubbing selfish assholes so whaddaweecare?

CC: The Claudia Malibu are the best rock and roll band in the world today.

CM: This interview will certainly make us famous.

CC: Adultery is wrong. Shoplifting at Walmart is right.

WW: Sell it on eBay.

CM: You should always call the police.

AA: Let me just finish eating this baby arm that's in my mouth.

CC: This question deserves a good answer. Real communication between people is fundamentally important for a full and satisfying existence. I think life must have been better before the telephone because people couldn't get in touch so easily and it meant more when they did. But I guess I'll never know about that.

CC: When you are too close or too far away you can't see anything properly--so you can never really tell can you?

CC: I ran something over once. No one knows. I'm sure of it.

CM: We only injure other bands.

AA: Plants have a penis and animals have a vagina.

CC: The Animals were a bluesy British Invasion band from Newcastle. The Plants I don't know. Good name though.

AA: I would rather be remembered by the whole universe forever or have my memory utterly destroyed in the maelstrom of time without end or meaning.

CC: Boy that was a silly answer from Adrian. How about being re-membered?

CC: Life is mysterious and wonderful--I like to explain things by questioning our modes of explanation. It's the same as answering a question with a question, wouldn't you say?

AA: Signing my soul to the devil? If that's the case, I better get a Ferrari outta this.

CC: YES. I am living life as fully as I know how. I just wanna be loved.

CM: I am The Claudia Malibu. I always know what we are doing. We are Rocking and Rolling. Gotta go practice now so stop asking us questions. Thank You. Bye-bye.