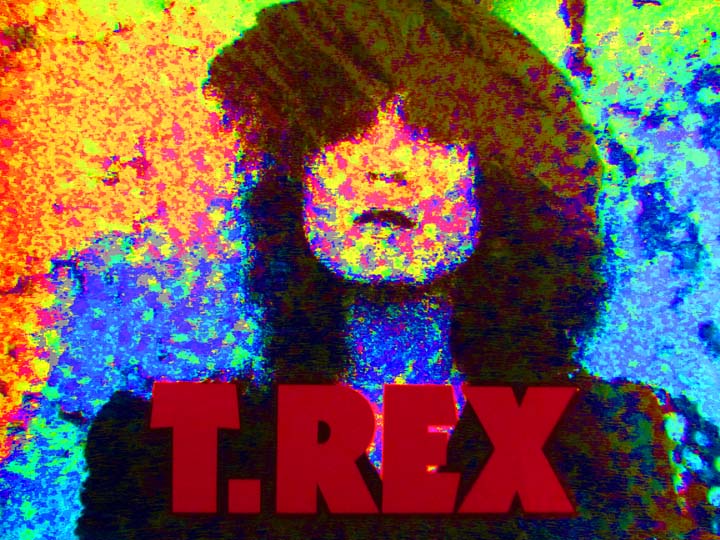 Mad About T. Rex
by

When I was a kid I was infatuated with Marc Bolan. He was unique and different. He was extraordinarily creative. He was peculiar and odd. And he was unlike anyone else making music at the time.

I saw T. Rex play live right after The Slider was released. The album was an instant huge hit in Great Britain but in the United States it was mainly heard only on college radio stations. I was very lucky to see Bolan play at this point in his career. To be honest, it wasn't his best performance. But being the lost and dysfunctional little spoiled brat that I was, at the time it was like being near God.

Unlike most who were hooked by the more popular albums (Electric Warrior, The Slider, and Tanx), it was the fourth Tyrannosaurus Rex album that had me forever hooked. I found Beard of Stars in the cheapie bins at Zayre's (a discount department store in the south). The album was puzzling and strange at first. But the more I listened, the more it grew on me. The music...and particularly the lyrics...were mesmerizing. Something about the music was ultimately intoxicating.

There were other artists and bands I loved, of course. But Marc Bolan reigned supreme. He had managed to become hugely popular (at least in Europe) while at the same time composing credible songs with some of the strangest lyrics ever. He was light years beyond all the other commercial pop/rock artists at the time. Like all the teenagers in Great Britain, I was totally sold on him. All the girls were in love with him. Like so many guys in Great Britain, I genuinely wanted to be Marc Bolan. There was no one who could match his charisma and magnetic personality. He was literate. He was hilarious. He was cerebral. And the music he made worked its way deep into my consciousness.

Junior high school was the most horrible period of my life. The other kids at school hated me. And I hated me too, because I was a confused little freak. Unfortunately, the only people I could relate to at that time were songwriters. Over time Marc Bolan became more than just a favorite musician though. He became what I needed most: A role model and another individual whose thoughts and words made complete sense to me. I was hypnotized by his lyrics.

When I heard that T. Rex were scheduled to play in Atlanta, I could not believe it. It was all I could think and talk about. I begged and begged my parents and they finally agreed to let me go. They were kind enough to drive me to and from the auditorium which was surely a major headache for them. Considering the fact that the place was in a questionable part of town (i.e., trashy and dangerous), it seems amazing now that they even let me go. I tried to get them to take me to the hotel where he was staying first so I tell him how much I admired his work. I wanted to apologize to him that so many people in the United States just didn't 'get' what he was doing. (Even at that tender young age I was already a budding music snob.) They didn't take me to the hotel, which was for the best. If I had been able to speak with him, I would have come off like some ridiculous starstruck child out in the middle of nowhere.

Once inside the Municipal Auditorium (a dirty old depressing concert hall), I quickly realized that I was the youngest person there. It was nothing like Great Britain where Marc Bolan had hoards of teenagers chasing him everywhere he went. The auditorium was only about half full and people seemed generally lethargic about the event. Almost all of the attendees were drugged out adult hippies who weren't quite ready for Marc's flamboyant sound and style. Whoever selected the opening act made an awful choice. The opening act was...The Doobie Brothers (barf). Their music was horrible and they were horrible. It was ultimately sickening watching the audience oooh and aaah over The Doobie Boobies. They were second-rate crap. And they didn't even belong on the same stage as Marc Bolan. Finally they stopped playing. The extremely positive audience reaction made me want to vomit. How in the world could all those people enjoy that awful mindless shit so much?

A half-full auditorium. A terrible opening band. Stoned out hippies everywhere. It was a huge change from the sold out concerts overseas playing for screaming teenagers. And I'm sure it must have been disappointing for Marc. He seemed kinda tired and worn out and like he was just going through the motions. The sound was terrible, probably because the band was at the mercy of the house soundman. The concert was good but not great. But none of this really mattered because it was still an unforgettable life changing experience.

T. Rex only played for about 40 minutes. As they left the stage, everyone in the audience began simultaneously yelling for them to play "Rip Off." That was one of my favorite songs from Electric Warrior too. So I stood on my chair and started yelling "Rip Off" along with everyone else. We all wanted an encore.

The band did not come back onstage. The show was over. After a few minutes, everyone left. There was a peculiar feeling of unease and disappointment in the air that I did not understand. What was confusing to me was how angry the hippies seemed to be at the end. I guess they all really wanted to hear "Rip Off" and he didn't play that one. It was a good song, but certainly not his best.

Several years later something caused a flashing white light to suddenly go off in my head. I forgot what triggered it, but for some reason I had a MAJOR REALIZATION.

Those hippies weren't yelling for Marc to play "Rip Off." They were mad as Hell because the band only played for 40 minutes. Duh!

Being so young and naïve, I didn't know what the words meant. So it seems absurd now that Marc Bolan's youngest and most devoted fan in Atlanta was yelling right along with all those angry hippies. How could I have been so dumb? Sheesh. I'm sorry, Marc. I'm sorry I was so young and stupid.

I did see T. Rex play once more a few years later as the opening act for Three Dog Night (the pairing was all wrong...AGAIN). But this concert was a major disappointment even for me because by that time Marc had morphed into something completely different and forgettable. Alcohol and substance abuse combined with an out-of-control ego had killed off the charisma and the magic. He had fired his original band members Mickey Finn, Steve Currie, and Bill Legend...all of whom were so crucial to his sound. He had dumped his wife June Child, who was in many ways responsible for his kickass look and style. And he had also dumped his producer Tony Visconti, who was hugely responsible for his sound and ultimate financial success. Sadly at that point Marc Bolan seemed just like everyone else. Once the coolest of the cool, by that time he had transformed into a generic phony show off. Thankfully near the end of his life he was getting his act together again. But by then it was too late. In a sudden instant he was gone forever.

Unlike so many artists from the 1970s whose sound is dated and irrelevant, Marc's music has held up extremely well. The songs from his peak years continue to sound fresh and totally relevant. The first four Tyrannosaurus Rex albums and the first four T. Rex albums still sound as incredible and infectious today as when they were first released.

Because he never could conquer the United States when he was alive, I think Mark Feld (his real name) would be very happy to see how many new and credible up-and-coming American bands and artists in the twenty-first century now proudly cite him as one of their main influences. It seems ironic that so many music journalists initially described his music as disposable pop.

While Bolan is mainly known for his music and the way he looked, what we always admire most are the lyrics. For several years, Marc was the ultimate wielder of words. His lyrics were works of art. Pure intellectual poetry. Unusual. Sensitive. Puzzling. Rather than focusing on the meaning in so many instances, he placed more emphasis on the way words sounded together.

Marc Bolan was far more than just another music celebrity. He was the greatest lyricist of the twentieth century.