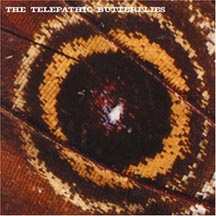 Rejean Ricard is the main songwriter for The Telepathic Butterflies...one of the best new pop bands of the twenty-first century. This e-mail interview took place not long after the release of the Songs From A Second Wave album (on Rainbow Quartz). Recorded on analog equipment, the album resonates with tons of groovy vibes and totally unforgettable melodies.

This is one of two e-mail interviews that were conducted simultaneously at the end of 2004. Compare Rejean Ricard's answers with responses provided by R. Stevie Moore.

Are you a good person or a bad person? Explain.

Good person. Too many attributes to list. Humility being one of them.

What makes you excited?

Pumpkin pie, the first time a new melody or chord progression comes into my head, a great tune, movie or book, sex, or just about anything that inspires a euphoric feeling.

If you had the choice of knowing exactly how and when you were going to die as opposed to not having any idea at all, which would you choose and why?

I can't answer that question. Not in less than half an hour. Isn't that a Twilight Zone episode?

Are you conscious of what you are doing? Explain.

Always. Except when I'm doing the following: sleeping, skating, or eating pumpkin pie.

What do you regret?

Over the past few years progressively less and less. Maybe some minor events or things said, but not enough to leave a lasting impression.

Do you believe in anything? If so, what?

I believe in the ability to chose our actions and reactions in almost every situation and circumstance.

Does knowledge make a person better or worse? Explain.

Depends on what kind of knowledge and what any given person does with it. Obviously, it's better to be smart than stupid. I have had the unfortunate pleasure of meeting some smart assholes but most of the smart people that I know are definitely better off for it.

Did you ever cheat in school? Is cheating wrong or right? Why?

On a few occasions. Again it depends on what and why you're cheating in the first place. I haven't lost any sleep over it. But I knew what and why I was cheating.

Is it acceptable to make assumptions about people based upon their appearance? Explain.

Are you open minded or closed minded? Explain.

Any more open minded and I'd need to see a surgeon.

How do you justify your existence?

Since when do we need to justify our existence?? Being as true to myself as possible.

Why is the world complicated?

Because people aren't honest with themselves.

Do you want to change the world? Why or why not?

On a good day, possibly?? Hmmmm. I don't know, what does that mean exactly? Turn a few people on perhaps. Yeah.