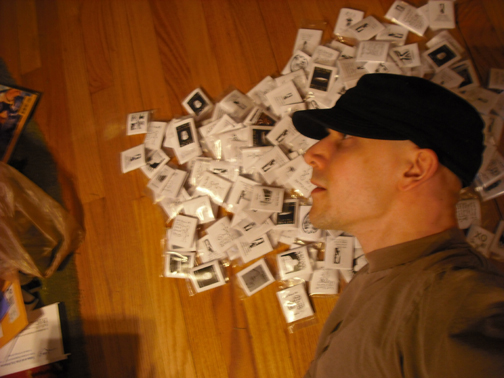 Brian John Mitchell is one of the most prolific, creative, and focused individuals currently operating in the undercurrents of music and art. Not only does he play in two bands (Remora and Small Life Form)...but he also runs the record label Silber Media (home to a whole slew of super cool bands) and publishes mini-comic books (also referred to as micro-comics). How can one man do it all? Mitchell does it all and he does it well. He is connected to artists all over the world and has made a substantial impact on a great number of individuals (both fans and other artists) through his hard work, focus, and pure dedication. Brian recently sent us some questions to answer for QRD. While answering these we wondered how he himself would respond to his own questions. So we slightly altered them and sent them back to him for this interview. Following are Mr. Mitchell's responses to his own questions, plus a few of our own...

Why do you do all the things that you do?

If I knew, I suppose I'd be able to quit and play video games like everybody else! Being a little older I think the truth of the matter is this feeling of isolation and an inability to properly communicate with others, which I didn't even know was not normal until a diagnosis on the autism spectrum a few years ago.

What's the secret to keeping going so consistently while others have given up or become incredibly sporadic?

I feel like I'm totally inconsistent, but other people are so much worse that it makes me look good. Though to be honest I think if I'd fallen into a more comfortable life with a cushy job and some kids I might lose the drive. It could still happen. Sometimes I pray for it to.

Which do you enjoy more and why: making music, running the Silber label, writing, or creating comics?

It varies year-to-year and day-to-day. I get super frustrated with the seeming lack of attention these days for my work, but if someone says something nice about anything it's my favorite thing that I work on. Lately I'm more into the creation process than the finalization process. I'm kinda fine with writing a first draft of a comic and never publishing it or drawing it or even writing a second draft. The same in music, I'm happier making a demo and never properly recording the song than doing a ton of work for something that very few people want to hear. In a way I think my favorite thing right now is just doing improvisational music that no one will ever hear. That said you kinda need to get your stuff out there to really push yourself to get better.

Do you think staying in North Carolina instead of moving to a larger metro area kept you from getting jaded about music?

Well, I'm still jaded, but I would say it probably kept me from getting so jaded that I'd abandon it. I do think that going home from work every day for a couple years and fooling around with a 4-track is less likely to happen in a hip town and doing that in the 1990s when everyone else was going to indie pop shows shaped my sound and my relationship with music in a way that wouldn't have happened if things had been more open to weird music when I was starting out.

How many comics have you done at this point?

Around 100. I think that will double sooner rather than later.

When did you begin your web site and why?

It was back in 1998. I didn't even have the internet at home! There was a girl I worked with who was still in high school that taught me some rudimentary html stuff and I'd type up stuff from QRD and give her a 3.5 inch floppy disk that she'd check over and upload for me. I knew it was a better way economically to get QRD out as the cost of shipping a 28 page zine had just gone up to $0.40 or something. But it was a little too soon really.

Do you miss the camaraderie of the 1990s zine culture?

Yeah. Nine out of ten zines sucked, but those disappeared anyway. People put so much time into those things in a way that technology has kinda destroyed. I mean, a blog is not a zine in anyway to me. Maybe it's just an age thing. The handwriting, the bad printing, the mis-folds, the stapling, it all brought us together while I feel like the new equivalents more push apart. I try my best to make QRD as a webzine still feel like a 1990s zine, but I don't know how successful I am with that. I probably should just do a zine again at some point.

How much of the material you receive from other artists and bands do you actually get a chance to check out?

I just sold my car and am a pedestrian now, so it might have an effect on things. Traditionally a band would get at least five minutes if they sent me a CD and about five seconds or less if they just sent me an MP3. If there's a personal email saying why they like Silber I always listen, but the other 90% I don't even check out at all. The reason I don't put out salsa funk music isn't because I haven't heard it, it's because it sucks. Why do those people send me their music?

What is your preferred format for listening to music?

Traditionally CDs. Without a car, I think I'm going to fall into the Spotify trap. It is horrible for musicians, but incredible for listeners.

What would you prefer to be doing most of the time?

I like sleeping. Or going walking in the woods.

It seems that you are driven more by credibility and artistic integrity that just trying to make money. How do you feel about commercial music in the twenty-first century? Why do you think you got involved with underground music and artists rather than mainstream commercial stuff?

I've been working in some bars lately that play top 40 music lately and I'm fine with it to be honest. Lorde or Lana Del Rey or Taylor Swift or Miley Cyrus or Imagine Dragons or R Kelly or Linkin Park are all fine, they do what they do well and I sometimes think about doing a series of covers of the songs like that just for fun or whatever. A secret of underground music and especially experimental and noise music is that the good stuff has musical knowledge behind it (be it intuitive or experience or schooling). People see Clang Quartet and they don't know that his prog metal background is what allows him to break the rules and make noise that is not just a racket. Or the slicnaton stuff is pure drone, but there's a musicality caused by his classical composition background. I like to think the same is true with some of my music. As far as why I'm involved with underground music instead of mainstream stuff, I think I just put out the best music that people who want to be on Silber have to offer. It's weird right now because of the amount Silber does and doesn't have to offer. It's funny because now everyone has a label that is just a Bandcamp page or whatever, so if I talk to anyone that isn't already familiar with the catalog they assume when I talk to them about wanting to put something out that I don't know anything and then I feel bad because I watch a great record go unheard even by my standards. It sucks. Oh, and I suppose with the weirdo music, I do like underdogs and just find it more interesting in general.

Do you release your own music only on your own label or is it available on other labels as well?

I've had a few records come out on other labels. Sometimes it's been a bit frustrating because I end up doing just as much work and somehow get even less sales. It does make me feel like I am half-way competent running a label, which is a nice feeling.

Do you generally work on your projects every day of the week or is it more sporadic than that?

I wish! Lately it's more like one week every two months I spend a few all day sessions on things getting ready for a show or something. I'm hoping to move to a new place next year where I'll have a work space and that will make it harder to work as little as I do. The plus side of working so little is the ideas that stick over the intervening time are usually good ones.

How much music do you listen to?

A couple hours a day, but mostly unintentionally except for what I'm working on.

Thanks for the opportunity of talking about my work and being a peer and friend. Oh, my website is SilberMedia.com and my most prominent bands I'm a member of are Remora and Small Life Form.